The "Jazzmaster Mini" Squier should have made.

Don't love the headstock shape,
but I do like the advertised "Rosewood" fingerboard,
and even more the "Jazzmaster style" P-90 pickups.
But until it arrives I have no idea about anything else.
The price is reasonable as well.
Four finish choices.
Stay tuned for further developments. 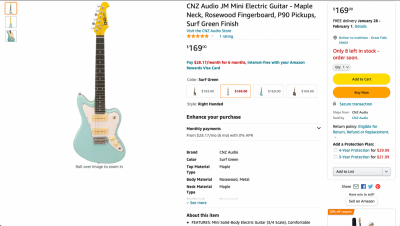 I thought about getting one of these, but my bad experience with the quality of two Indio OS40s (i.e., JM style) that Monoprice sent me scared me off.

I hope you get a good one, @blackspider57!
B

SoCalJim said:
I hope you get a good one
Click to expand...

I'd prefer indian laurel on the Jazzmaster mini too, P-90 as well. And as we talk why no burst colour or such.
B

Update:
I bailed on the purchase, as it was not something I needed, and I enjoy my Squier mini Jazzmaster.
So no review will be forthcoming.
I did contact them and asked to buy a loaded pickguard?
They said No!
(Never hurts to ask)

I own a few of these. I can't argue with any of the suggestions posted but I love mine just the way they are. I got to admit, though, that putting P90s in one has crossed my mind more than once. And hey, at least one colour is surf green, which I have. I keep my minis in gig bags when not played so my eyes never drift over them casually, but the surf green colour is a little icing on the cake in terms of appearances. It's a much desired colour by a lot of players and would work well with just about anything in the Fender/Squier lineup (except for maybe the Telecaster; I've always regarded butterscotch blonde as the definitive-looking Telecaster for some reason). I don't think it would look right on Gibson guitars, however, but other manufacturers would use it, too. They tend to be on the rare side for Squier and I love having mine.

As the recently bought Strat mini came in two parts I did the test. Color-wise the laurel fretboard fit the black body pretty well in my opinion. 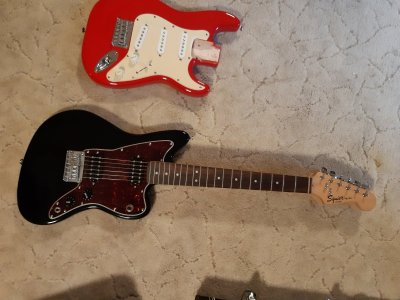