JW Adams said:
Yes if it was the custom rose wood Telecaster custom made for Elvis Presley it weighed 10 lbs
Click to expand...

I would take both, Elvis rosewood is for sale on Reverb

JW Adams said:
I would take both
Click to expand...

It's not just Squiers. I just sold a Player Tele and Player Plus Strat for my bldg. manager that he got from SW, and they were both VERY heavy compared to my MIA Fenders and Squiers, and the two Player Strats I had. I don't know if he ordered heavy ones thinking they'd be better sounding (he's an acoustic player that decided to dip his toes into electrics, and decided that an Acoustasonic was as much electric as he wanted), but they were really heavy, especially the Tele.

I've got a 10# plus Indio DLX Ash Tele. It sounds great, but it is an anchor.

Get a neck you like, a pine body (Tonebomb or similar), some stain and a bottle of Tru-Oil. 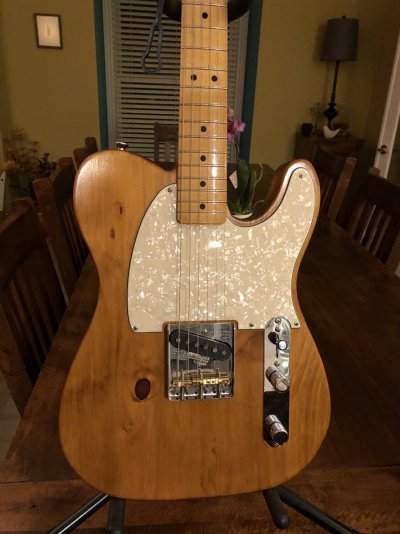 I sat on a 1985/86 Japanese Thinline Tele for 25 years! You needed a Strap to make it weight over 6 lbs! Had to sell and have since put together over 65 Partscaster's trying to make them light as she was! Finally have a couple under 6 lbs.

Benlostforyears said:
I love that wide open grain pattern of the yellow pine, but most of the newest CV Tele's I've seen have a tighter pattern than the previous ones.