I looked but didn't see one started yet. Is anyone else here into bicycles in a big way?

Some background - I was into bicycling heavily as a teenager. As a young adult I worked as a bicycle mechanic at a shop for a couple of years. Around that time I was doing amateur mountain bike races.

I dropped off the cycling map completely for about 20 years after a crumby experience. Some friends went on to greatness though. The girl I used to train with moved to Vancouver and became a pro on the cross country mountain bike scene. That was cool to watch.

A few years ago, after my long hiatus, I sold my car and used the proceeds to buy a cyclocross bike. Last summer I bought a single speed road bike and took it out for some country rides. The longest was 70 Km. Hopefully this year I'll get out more.

I turn the big five-o this year and was thinking about buying a new road bike as a present to myself. Something in me wants to stay away from disc brakes, but that's a whole other issue haha. Probably nostalgia for my late 80s/early 90s wrenching days.

Anyway, enough of my yacking. Anyone else?
M 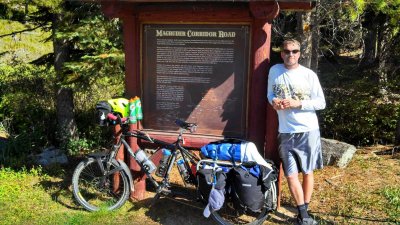 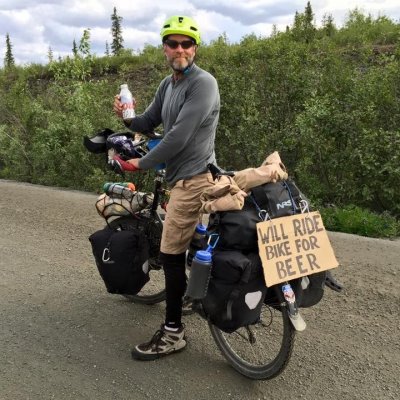 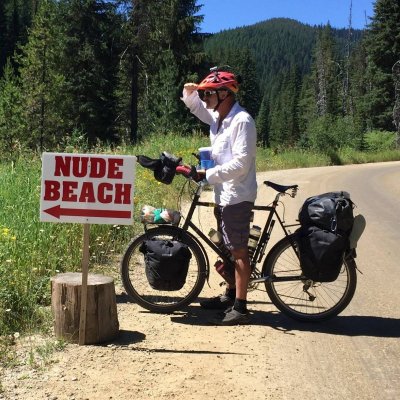 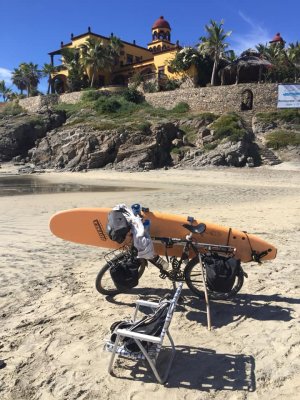 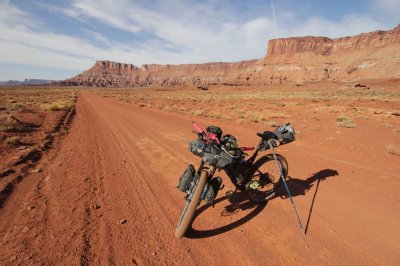 Have gotten out of it over the last three years. due to health issues, and what not .... but my MTB is tuned and ready to roll when my titanium hips feel up to it .... have slicks for the road, knobbies for the dirt, but am deathly afraid of crashing, after like $120,000 worth of hip replacements (luckily I had incredible insurance at the time).....I miss riding, mostly miss xc riding, drivers around here bite the big one when it comes to a fellow human trying to cycle on the road......morons

I'm no racer either. Those days are long gone. Strictly recreational. In fact nearly always solo.

How did you strap the surfboard to your bike and still be able to pedal?

I used to be into mountain bikes big time around turn of century. lol I have a 96 Trek 9700 Carbon fiber bike that only has one part left from the originial bike. Bottom bracket I think. Frame is a 97. LOL. But I bought it in late 96 as a 9600, I think. Broke frame and it was replaced under warranty with a 97 frame. Still have it. I have a 2000 Specialized FSR dual suspension with a big obscene downhill seat on it. Tioga something or other.

And a 90 something Schwinn cruiser. I had a motorcycle crash and gained a lot of weight while recuperating that I never got inspired to take off so I ride the Schwinn occasionally.

Like guitars, I was constantly changing out parts for the best I could afford - not the lightest because I have never been a small guy. But it was a lot of fun and probably one of the parts I miss about my younger life. When I was a young guy in the late 70s, I went everywhere by bicycle.

Road riding would be terrifying in our area, I would think. Motorists don't think twice about pushing you in a ditch becasue you are in their way. They pay road taxes, by God, and should NOT be impeded by someone on a bicycle. They don't think about the bicyclist pays taxes as well.

Fun story - I was escorting a big bicycle ride (a RACE to the first 10 guys or so). At the time I was leading the leader, trying to keep him moving, staying a bit in front of him. I was cruising down a hill into a flat when leader pulled along side me at 50 mph and said I really needed to speed up some. I admired him more than me at that moment 75 miles into a century ride. He was hauling.
M

How did you strap the surfboard to your bike and still be able to pedal?
Click to expand...

@fuelish Sounds like a goal to work toward. That's awesome!

And I hear you about drivers. I have about a 20 minute ride to get to the countryside. Drivers here are terrifying to deal with. But once I'm out of the city it's pretty good if I stick to the sparsely populated roads (many of which I've learned the hard way are sometimes 2 inch deep road crush - on skinny wheels it's exhausting).

@66musicmaster Sounds like we had similar experiences on the upgrades path. When I worked as a mechanic it was terrible - I saw everything that was coming out. I've actually got three boxes sitting here of parts for the singlespeed I bought last year. It kind of never ends, much like guitars.

Before I had a drivers license, I rode everywhere too. One of my friends commented once the happiest he saw me was when I was riding everywhere, working at the bike shop. That was part of the motivation to get a bike again when I decided I'd had it with being a car owner.

I ride when my body allows it.

Guy Who Likes to Play Guitar

I've ridden all my life, raced and rode in a touring club when I was younger. Now I just ride 15-20 miles every day to stay healthy. It seems to work, because at 63 I'm not on any medication, not overweight, blood pressure around 120/70, LDL under 100, etc.. 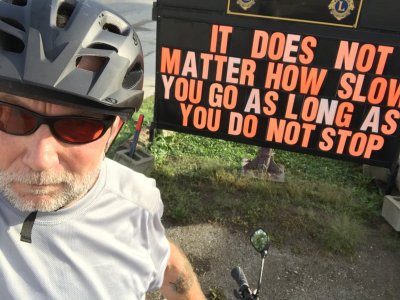 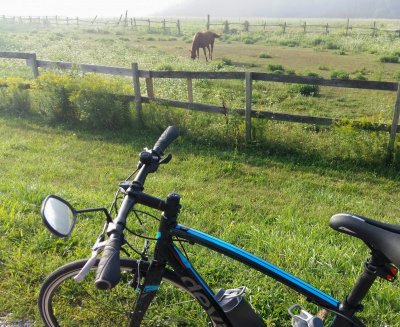 I ride for fun, often over 100 km (60 miles). I turn sixty in June and I am overweight, so you could time me with a calendar however.

Bicycles used to be my other GAS but I'm down to three now. I'm an old lady and ride on nice paved trails lol. 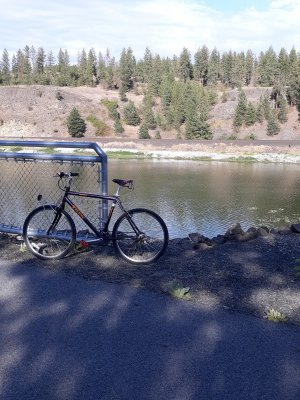 Welcome to my world, well not the lady part... 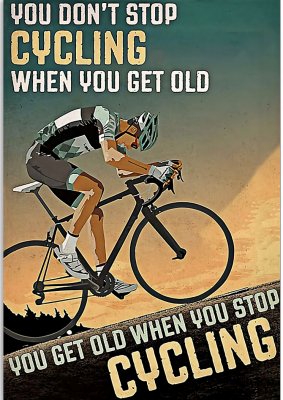 When I saw this thread I was thinking calcio bicicletta...


So yeah, if I want to keep footballing/playing soccer, I need to ride my bike. Mostly rail trails. As soon as the snow melts.

Our weather here (winnipeg) has just warmed up enough to get my bike out. I'm planning on a nice long ride tomorrow if everything goes as planned. Been cycling since I was a teen, rode anywhere and every where. Cross the prairie when I was in my teens, Down the steep roads in the Rockys (terrifying!), atlantic provinces (never try for a shortcut on PEI, you will end up on a beach). I still have my original road bike I bought in the 80s.
I am glad for the change in seasons. Having a break and x-country skiing in the winter makes you appreciate the first few bike rides even more

We have a 30+ mile rails to trails conversion less than 200 yards from my house. I ride that when I can. 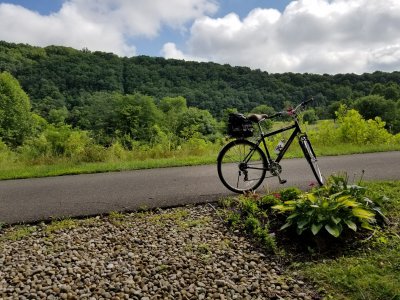 After 20 years of fixing bikes in a shop and forty plus hours a week I hate even looking at a bike when I leave for the day.I’d rather walk.

I rode a lot in my youth and in my 20s I did a ton. I got away from it when the kids arrived. I busted out my 34 year old Motobecane last year and did one 40 mile ride. I am not setting any land speed records though. Did some Mountain biking. too on a 30 year old Cannondale with the original Rock Shox. Where I live is beautiful for both mountain biking and road riding and we have a plethora of rail trails that they keep interconnecting

Pumped for my first ride of the season tomorrow. 40km (25 mi) minimum. 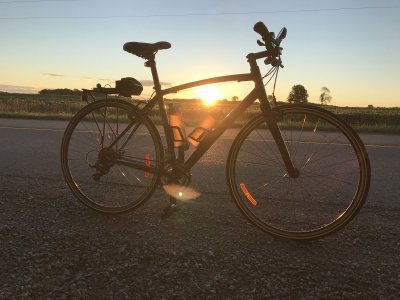